Building a New Life Begins With Career Training: “Every time I think of how blessed I am, I think of JVS”

Every time Sandra Gonzalez heads to work, she’s reminded of just how blessed she is and how far she’s come.

As a graduate of the JVS ApartmentWorks career training program, this 25-year-old single mom has spent the past several months working for Jones and Jones Communities in Los Angeles. She is shadowing a more experienced apartment maintenance worker, learning to repair and replace drain pipes. She also repairs and replaces faucets, garbage disposals and toilets. 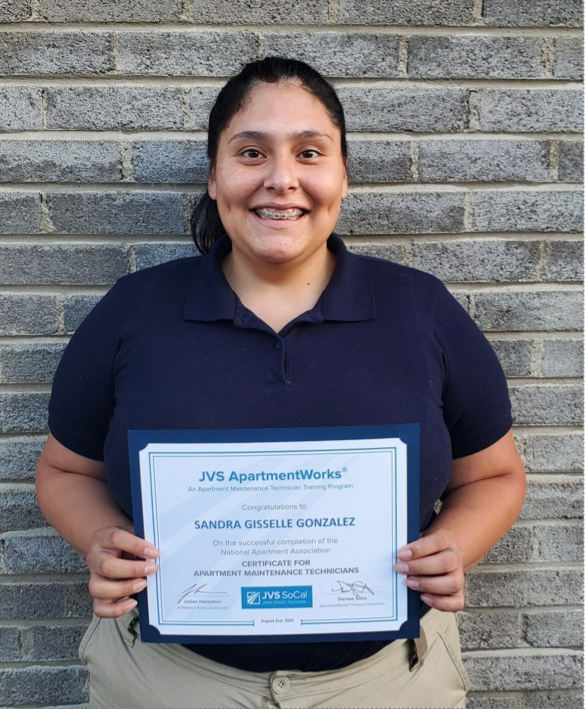 “It’s so amazing,” says Sandra, who was living at a women’s shelter just a few months ago with her now-10-month-old daughter, Chloe Olive.

Sandra grew up in Santa Monica and Los Angeles with her mom and two siblings. Her dad was in and out of jail and not really in the picture. “I got into a little trouble and have a history of drug abuse,” she shares. “I was struggling, living in a shelter and on welfare. I didn’t have any guidance to find a job, let alone a career.”

Sandra’s work experience to date had included minimum-wage jobs at doggie daycares and an automotive repair shop. She considered working toward her mechanic certificate but knew it could take years. Then, she became pregnant, and building a career took a back seat.

While living at the women’s shelter with Chloe, Sandra was introduced to Imagine LA, a nonprofit organization working to end the family poverty and homelessness cycle. Sandra’s case manager told her about several career training programs, including ApartmentWorks.

“At first, I said, ‘No, I’m a single mom,’” she remembers. But after hearing more about the program and that it would only take eight weeks and included help with job placement, she applied.

“I knew I was handy when I was a teen,” Sandra says. “My mom was a single mom, and there were no guys around to do things like fix a car for us, so we had to do it on our own. I honestly didn’t say, ‘Apartment maintenance, that’s what I want to do for the rest of my life’, but now I’m so happy I did it.”

Sandra says the program prepared her not only with apartment maintenance skills but also with values like being professional and on time. She also felt like she had all the help she needed and was encouraged to communicate and ask questions.

“The JVS program is a really good opportunity,” she says. “I recommended it to a friend, who is the daughter of my mom’s best friend. I wish there were more people who I could tell about it.”

Since graduating and starting her new career, Sandra has come so far. She and Chloe are living in Section 8 housing, and she has been able to save $2,000. She’ll spend some of it to throw Chloe a 1st birthday party in December—all on her own—and for Christmas.

“I always think of other people who work for minimum wage, and I think I’m so lucky because I get paid $20 an hour,” Sandra says. “I feel so blessed, and every time I think of how blessed I am, I think of JVS.”

“I would say that besides getting over my drug addiction, this was the second biggest accomplishment I’ve ever had,” she adds. “It gave me a foot in the door to be in the professional world and have a different title than just mom.”

Are you interested in helping more people like Sandra to get their foot in the door to a life-changing career? Learn how here.

Management Team and 2023 Board