JVS SoCal has a remarkable history, grounded in Jewish values and reflecting our capacity to evolve in response to the changing needs of job seekers and employers. The core Jewish value of Tikkun Olam – Repairing the World, is woven into our organizational culture and continues to drive our mission. 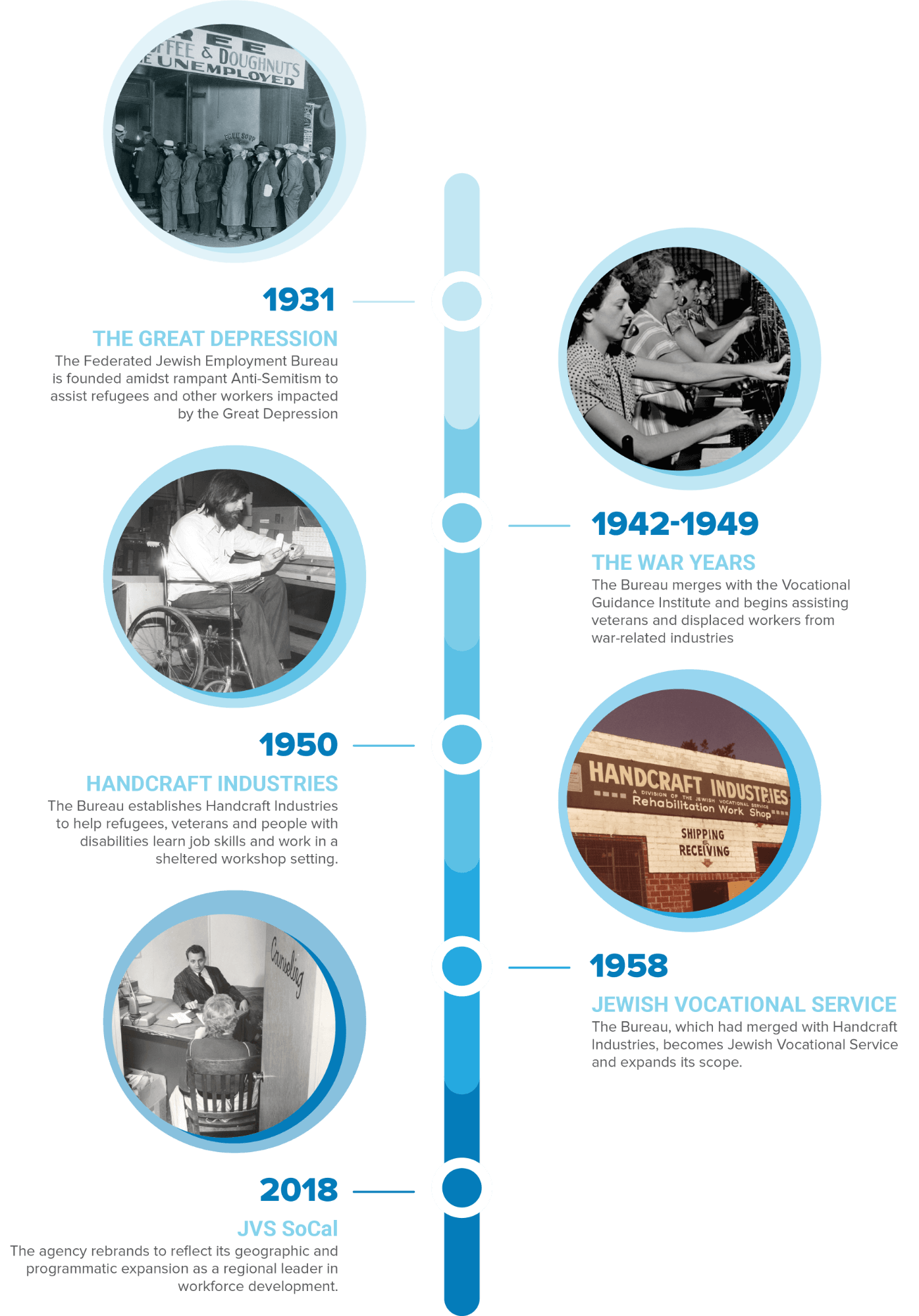 We were founded in 1931 as the Federated Employment Bureau (FEB) in response to a recognized community need and “based on the discrimination Jews faced in their economic life.” The Articles of Incorporation defined the agency’s purpose: to provide “benevolent aid and comfort…and to aid and assist in securing employment for all deserving men and women.’ From the beginning, our mission was grounded in compassion, a response to inequity and the desire to empower others to improve their lives.

From its earliest days as a single desk in an office on Bunker Hill, the fledgling organization faced daunting social and economic challenges with the highest unemployment rates the country had ever seen. Prejudice against Jews was prevalent and jobs were scarce. In the 1930s, the highest paying job on the FEB roster was that of a typist, earning $15 a day, followed by a nurse, making $20 a week. A machinist only made $4 a day.

In 1939, the agency changed its name to the Federated Jewish Employment Bureau (FJEB) and entered the decade of the 1940’s, facing the upheaval of World War II and a period of monumental change for the nation and the organization.

FJEB Board President J.A. Rosenkranz wrote, “American entry into the war has confronted Jewish employment and vocational agencies with greater and more urgent responsibilities than ever before. They must henceforth not only concern themselves with efforts to solve the special adjustment problems of Jews, but most utilize all their resources in the common national struggle for victory.”

The U.S. Government turned to the FJEB to help fill civilian as well as war-related jobs and women began entering the workforce to release men to join the armed forces. The agency, which had been renamed the Jewish Employment and Counseling Service (JECS) continued to advocate for fair employment practices, a founding tenet that has shaped our 87-year history.

In 1944, the JECS Board wrote to President Roosevelt requesting “…Fair Employment Discrimination laws in war industries, to allow Negroes [sic] to be hired for the railroads.” JECS would later push for similar policies for older workers facing age limits on hiring, another reflection of Jewish values of social justice and equality.

As the war wound down, the War Powers Commission requested that JECS create a vocational guidance plan for returning veterans, resulting in the first of a series of veteran-focused initiatives that continues to this day. In the post-war period, an entire range of new and innovative programs and partnerships were developed to address the challenges of rehabilitation for returning veterans, the flood of new immigrants, the reintegration of people on parole and the needs of at-risk youth.

In agency board minutes from 1947, “…the fact that many non-Jews were served was considered.” The board moved that, “there should be no selectivity of clients for service on any basis.” This was the first formal policy statement recognizing and affirming the agency’s non-sectarian approach to community service. A decade later, the name of the agency was changed for the fourth time, to Jewish Vocational Service.

In the 60 years that followed, JVS continued to grow, to create new and effective program models and to expand its partnerships in the public and private sectors – building corporate, foundation and private philanthropic support for our mission.

Our new name represents our ongoing commitment to empowering those in need of jobs, facilitating a vision for a prosperous future and achieving success through economic independence and sustainable employment.

Though our name has changed several times over the decades, this most recent name change reflects not only a geographic expansion, but our non-sectarian commitment to serve the entire community of Southern California while avoiding confusion amongst those in need of our services.

Our values, still firmly rooted in the Jewish tradition of Tikkun Olam, will continue to guide our programs and operations. As we expand our geographic reach in Southern California and impact nearly 50,000 people in need each year through our workforce development initiatives, our legacy remains the solid foundation that supports and guides us.

Management Team and 2023 Board